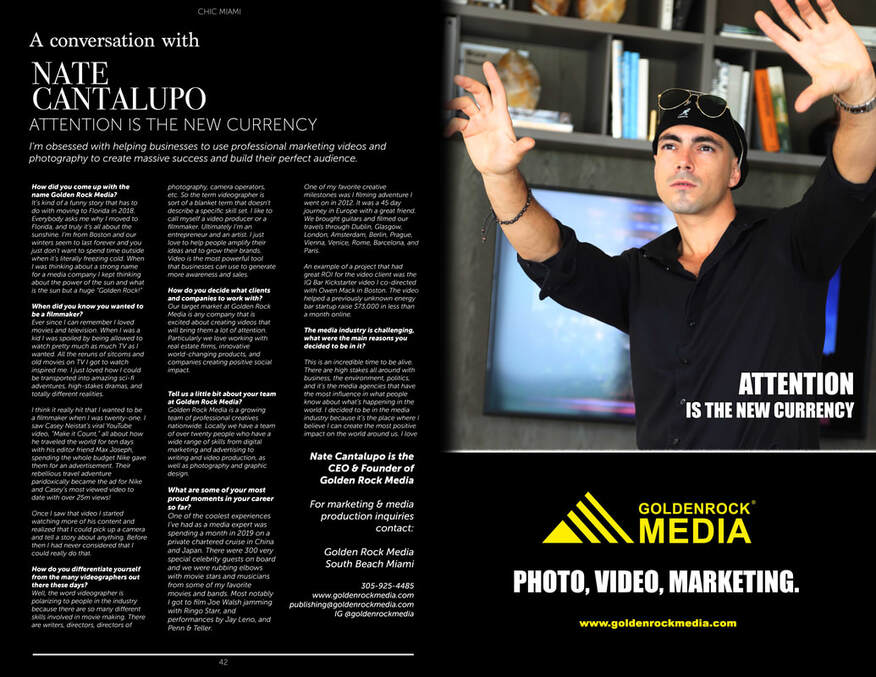 A conversation with
NATE
CANTALUPO
ATTENTION IS THE NEW CURRENCY
​I’m obsessed with helping businesses to use professional marketing videos and photography to create massive success and build their perfect audience.

Q:
How did you come up with the name Golden Rock Media?
It’s kind of a funny story that has to do with moving to Florida in 2018. Everybody asks me why I moved to Florida, and truly it’s all about the sunshine. I’m from Boston and our winters seem to last forever and you just don’t want to spend time outside when it’s literally freezing cold. When I was thinking about a strong name for a media company I kept thinking about the power of the sun and what is the sun but a huge “Golden Rock!”

Q:
When did you know you wanted to be a filmmaker?
Ever since I can remember I loved movies and television. When I was a kid I was spoiled by being allowed to watch pretty much as much TV as I wanted. All the reruns of sitcoms and old movies on TV I got to watch inspired me. I just loved how I could be transported into amazing sci-fi adventures, high-stakes dramas, and totally different realities.

I think it really hit that I wanted to be a filmmaker when I was twenty-one. I saw Casey Neistat’s viral YouTube video, “Make it Count,” all about how he traveled the world for ten days with his editor friend Max Joseph, spending the whole budget Nike gave them for an advertisement. Their rebellious travel adventure paridoxically became the ad for Nike and Casey’s most viewed video to date with over 25m views!

Once I saw that video I started watching more of his content and realized that I could pick up a camera and tell a story about anything. Before then I had never considered that I could really do that.

​Q:
How do you differentiate yourself from the many videographers out there these days?
Well, the word videographer is polarizing to people in the industry because there are so many different skills involved in movie making. There are writers, directors, directors of photography, camera operators, etc. So the term videographer is sort of a blanket term that doesn’t describe a specific skill set. I like to call myself a video producer or a filmmaker. Ultimately I’m an entrepreneur and an artist. I just love to help people amplify their ideas and to grow their brands. Video is the most powerful tool that businesses can use to generate more awareness and sales.

​Q:
How do you decide what clients and companies to work with?
Our target market at Golden Rock Media is any company that is excited about creating videos that will bring them a lot of attention. Particularly we love working with real estate firms, innovative world-changing products, and companies creating positive social impact.

​Q:
Tell us a little bit about your team at Golden Rock Media?
Golden Rock Media is a growing team of professional creatives nationwide. Locally we have a team of over twenty people who have a wide range of skills from digital marketing and advertising to writing and video production, as well as photography and graphic design.

​Q:
What are some of your most proud moments in your career so far?
One of the coolest experiences I’ve had as a media expert was spending a month in 2019 on a private chartered cruise in China and Japan. There were 300 very special celebrity guests on board and we were rubbing elbows with movie stars and musicians from some of my favorite movies and bands. Most notably I got to film Joe Walsh jamming with Ringo Starr, and performances by Jay Leno, and Penn & Teller.

One of my favorite creative milestones was I filming adventure I went on in 2012. It was a 45 day journey in Europe with a great friend. We brought guitars and filmed our travels through Dublin, Glasgow, London, Amsterdam, Berlin, Prague, Vienna, Venice, Rome, Barcelona, and Paris.

An example of a project that had great ROI for the video client was the IQ Bar Kickstarter video I co-directed with Owen Mack in Boston. The video helped a previously unknown energy bar startup raise $73,000 in less than a month online.


​Q:
The media industry is challenging, what were the main reasons you decided to be in it?

This is an incredible time to be alive. There are high stakes all around with business, the environment, politics, and it’s the media agencies that have the most influence in what people know about what’s happening in the world. I decided to be in the media industry because it’s the place where I believe I can create the most positive impact on the world around us. I love sharing ideas and helping people succeed with their greatest vision of their work.

Nate Cantalupo is the CEO & Founder of
Golden Rock Media